In Puerto Rico, once an abortion haven for American women,
history could repeat itself 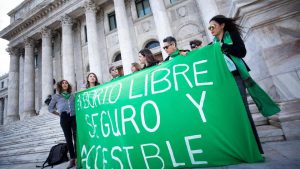 SAN JUAN
In 1963, the New York Daily News ran stories about an underground, word-of-mouth network of doctors in Puerto Rico who performed abortions on American women, from “suburban society matrons” to “unmarried college girls,” who traveled to the island to end pregnancies. “

The sun-baked island in the Caribbean has become the abortion capital of the hemisphere,” the series claimed.

Sixty years later, following the U.S. Supreme Court reversal of a constitutional right to abortion, Puerto Rico could again become a destination for women from states where the procedure is restricted or banned, according to experts who favor abortion on the island.

“I would not be surprised if we see again that many women choose to come to Puerto Rico. The doors should be opened … [for] them to have access to a safe abortion,” Puerto Rico Sen. Ana Irma Rivera Lassén told the Miami Herald. “But I am concerned about those women and people who do not have the money to pay for an abortion. … They will return to the past of blood and loss of life.”

Puerto Rico Justice Secretary Domingo Emanuelli said in a statement that the high court’s decision does not affect the island’s own laws, and that women and doctors will not be prosecuted for seeking or providing abortions.

“The decision of the Supreme Court of the United States does not revoke any Puerto Rican precedent, nor does it revoke legislation, or abortion clinic regulations,” said Patricia Otón, a pro-abortion rights lawyer who specializes in sexual and reproductive rights.

But Puerto Ricans in favor of choice fear that the island’s conservative politicians and a growing anti-abortion movement, emboldened by the overturning of Roe v. Wade, could threaten the U.S. territory’s legal access to the procedure.

“The reversal of Roe v. Wade … marks a before and after for the Puerto Rican legislature. The times of excuses are over,” said Rodríguez Veve in a recent livestream. “No one will be able to hide behind federal jurisprudence anymore.”

OVER 100 YEARS OF LEGAL ABORTION

Four years after the United States invaded Puerto Rico, in 1902, American authorities banned abortions through the island’s penal code and punished those who performed them with jail time unless a termination was “necessary” to save a woman’s life.

In 1937, Puerto Rico’s legislature kept the prohibition in place but authorized doctors to end pregnancies to protect a woman’s life or health. The law promoted eugenics — an inaccurate and racist theory aiming to “improve” the human race through genetics — in the island’s healthcare system. Along with other legislation, it enabled the systemic use of mass sterilizations as birth control over the following decades, according to scholars.

The law also facilitated access to abortion training as well as “the establishment of a network of [safe] clandestine abortions,” said Yamila Azize Vargas, a research professor who has studied abortions in Puerto Rico for more than 25 years.

American women, especially those who were white and able to afford it, flocked to Puerto Rico in what became known as the “San Juan weekend” seeking doctors that would end their pregnancies.

Despite the 1937 changes to the law, the procedure remained illegal in practical terms. Legislators and the island’s medical association called for the prosecution of abortion providers.

The phenomenon of the San Juan weekend reached its height from the end of the 1950s through the early 1970s, diminishing after New York and other states loosened abortion restrictions, Azize Vargas said.

Local media documented the deaths or severe complications from the unsafe abortions of Puerto Rican women, wrote scholar Rosa Marchand, who analyzed abortion in Puerto Rico between 1937 and 1970.

Some of the doctors who performed San Juan weekend clandestine abortions became the first to open abortion clinics after the 1973 Roe v. Wade ruling, according to Azize Vargas.

Puerto Rico’s Penal Code still criminalizes abortions, but allows for doctors to carry out therapeutic abortions to preserve the mother’s life or health, which a 1980 Puerto Rico Supreme Court decision recognized as both physical and mental health.

The landmark case, known as Pueblo v. Duarte, overturned the conviction of a doctor who performed an abortion on a 16-year-old girl and ruled that the island’s legislature cannot give parents an absolute veto in an underage girl’s abortion decision. It also interpreted said terminations could happen at any stage of pregnancy and did not regulate abortion after 13 weeks as the Roe v. Wade ruling allowed states to do.

“That places Puerto Rico, from that moment, as one of the [U.S.] jurisdictions with the greatest protection of the right to abortion,” said Yanira Reyes, a constitutional law expert.

Puerto Rico has a right to privacy that is explicitly spelled out in the island’s Constitution. Court decisions have broadened the right’s scope and it can be invoked not only against the government but also against private citizens. And it protects abortion rights, lawyers say.

“It would be very difficult to think … that it does not include the right to decide about your body,” said Otón, the sexual and reproductive rights expert.

Today, three out of four of Puerto Rico’s clinics perform abortions at up to 14 weeks of pregnancy. Most abortions on the island fall within that time frame, according to an April memo from Puerto Rico Secretary of Health Carlos Mellado to Sen. Rodríguez Veve. Only a small percentage, he later said at public hearings for her bill, happen at 22 weeks.

Dr. Yari Vale Moreno, a gynecologist-obstetrician, has the only practice on the island that performs abortions up to 24 weeks. After that period abortions for lethal fetal conditions are carried out at the island’s main public hospital. A patient over 24 weeks who wants an elective abortion has to go to places with no term restrictions, such as Colorado and Washington, D.C., where the procedure can cost as much as $20,000, Vale Moreno said.

The island’s. clinics also see patients from the Dominican Republic, where there is a blanket ban on abortion, and women from the English-speaking Caribbean. In the U.S. Virgin Islands, for example, a surgeon or gynecologist must perform abortions after 12 weeks in a hospital setting. After 24 weeks, abortions are only permitted if a physician has “reasonable cause” to believe there is “substantial risk” to the woman’s life or health.

Some Puerto Ricans in favor of abortion rights, including lawyers and activists, believe island clinics could soon perform abortions on women from states where the procedure is banned or restricted. Stephanie Vega Flores, board member of the nonprofit Profamilias, said the clinic that its organization runs fielded calls from women in Texas when the state banned most abortions after a heartbeat is detected. 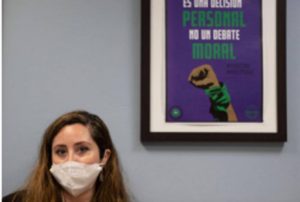 “If it is closer to take the car and go to a state a few hours driving round trip, they will go there. But there is no doubt that women from the United States will arrive here,” said Otón, the lawyer.

The island could also become a destination for Florida women seeking abortions due to geographical proximity, said clinic providers, lawyers and activists, especially if the state takes steps to further restrict abortions. A new law that went into effect in Florida on July 1 bans most abortions after 15 weeks, although a challenge to the law is being heard by a state appeals court. At a late June gathering of South Florida Republicans and conservatives following the Roe v. Wade reversal, Lt. Gov. Jeanette Núñez told reporters the administration is “looking to see what other restrictions could exist beyond what Florida is already doing.”

“Especially Puerto Ricans who know that abortion is still legal here, and if they have relatives, even more so they will come seeking services,” said Dr. Vale Moreno.

Activists and abortion providers on the island worry that conservative politicians will make it even harder to get an abortion on an island where some hurdles already exist. There are no abortion clinics outside the San Juan metropolitan area. Insurance companies don’t cover the procedure. Cultural stigmas, religious norms and disinformation are also obstacles for some women.

Comments are closed, but trackbacks and pingbacks are open.